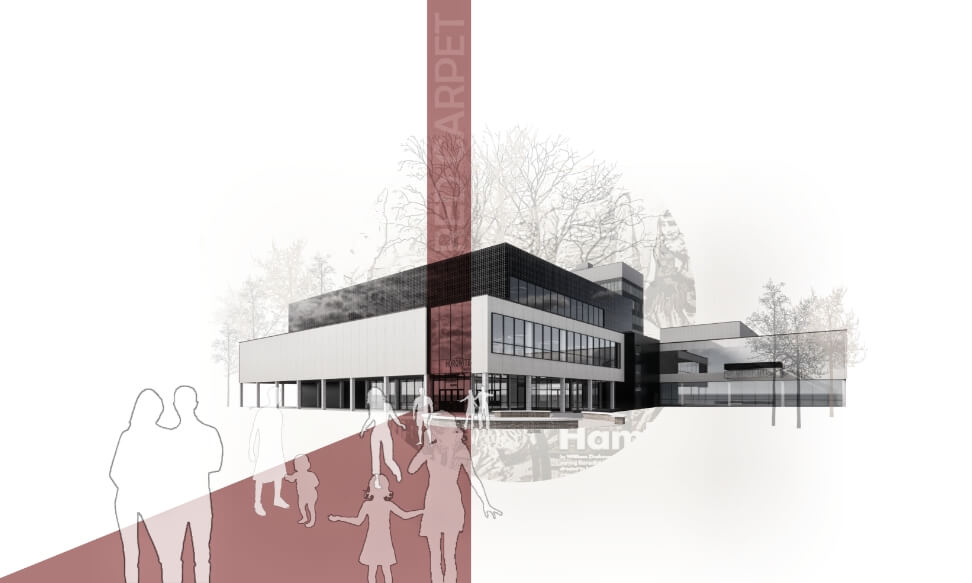 Arc Studio’s role in the revitalization of this historical Theatre was to enhance a key point of connections between campus, alumni, and the larger community. Restoration and expansion of the space were executed by bringing the design and technical elements of the Theatre up to date and judiciously expanding the flexibility and size of the pre-performance spaces to allow for a wider range of activities and programming.

The objective for this redeveloped Theatre was an efficient and competitive operation, additional / expanded performing spaces, and an overall enriched patron experience. 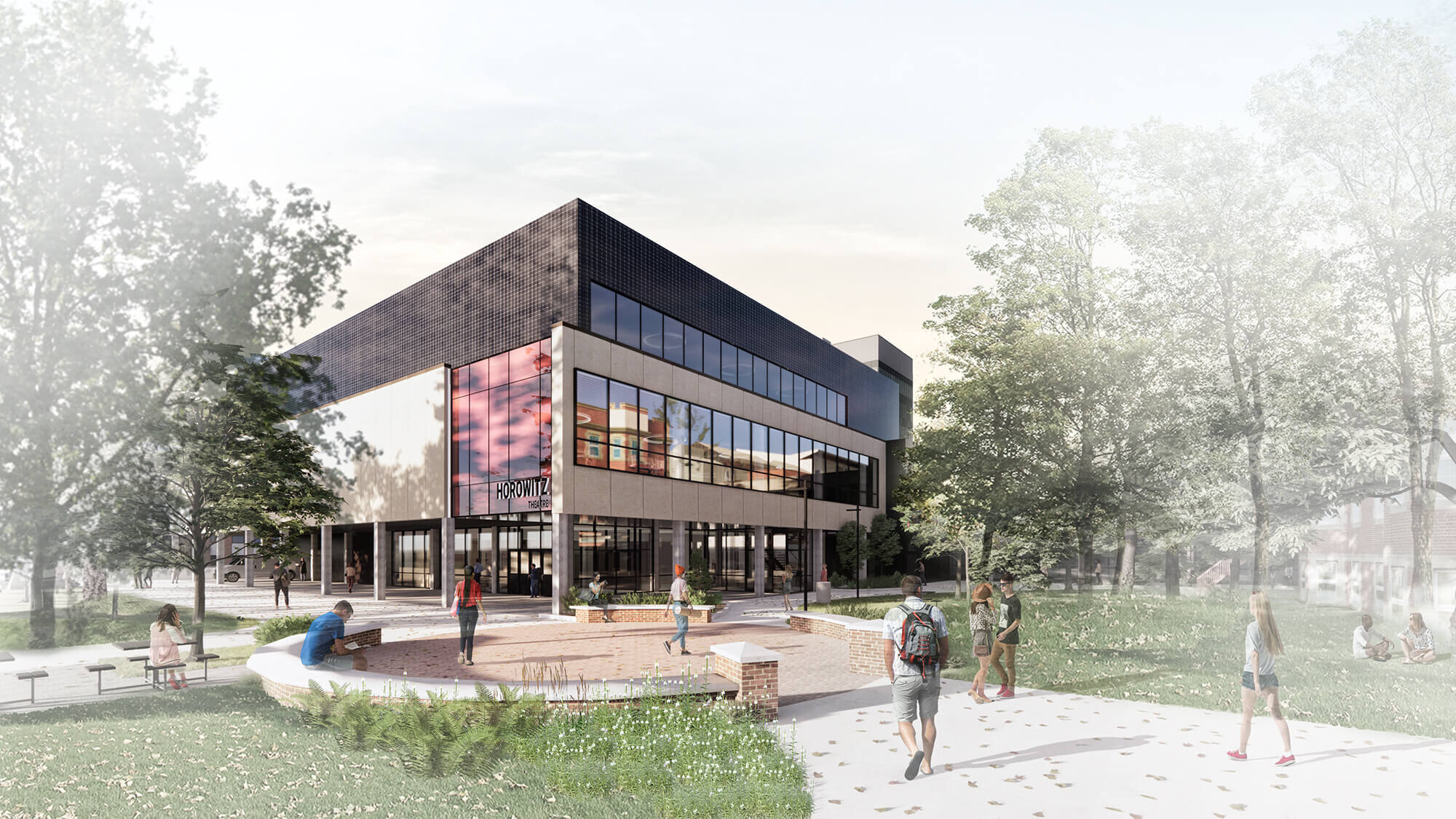 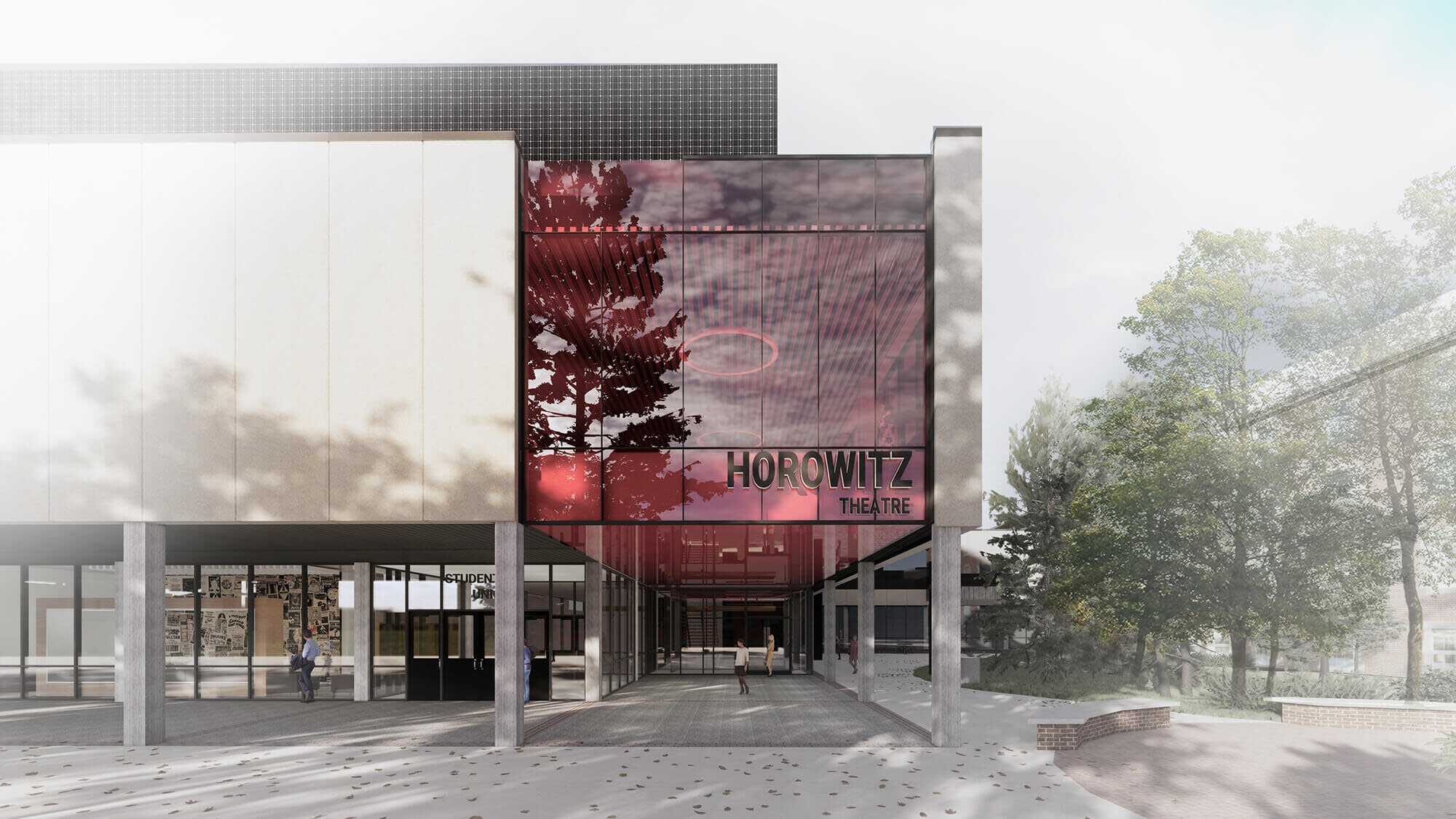 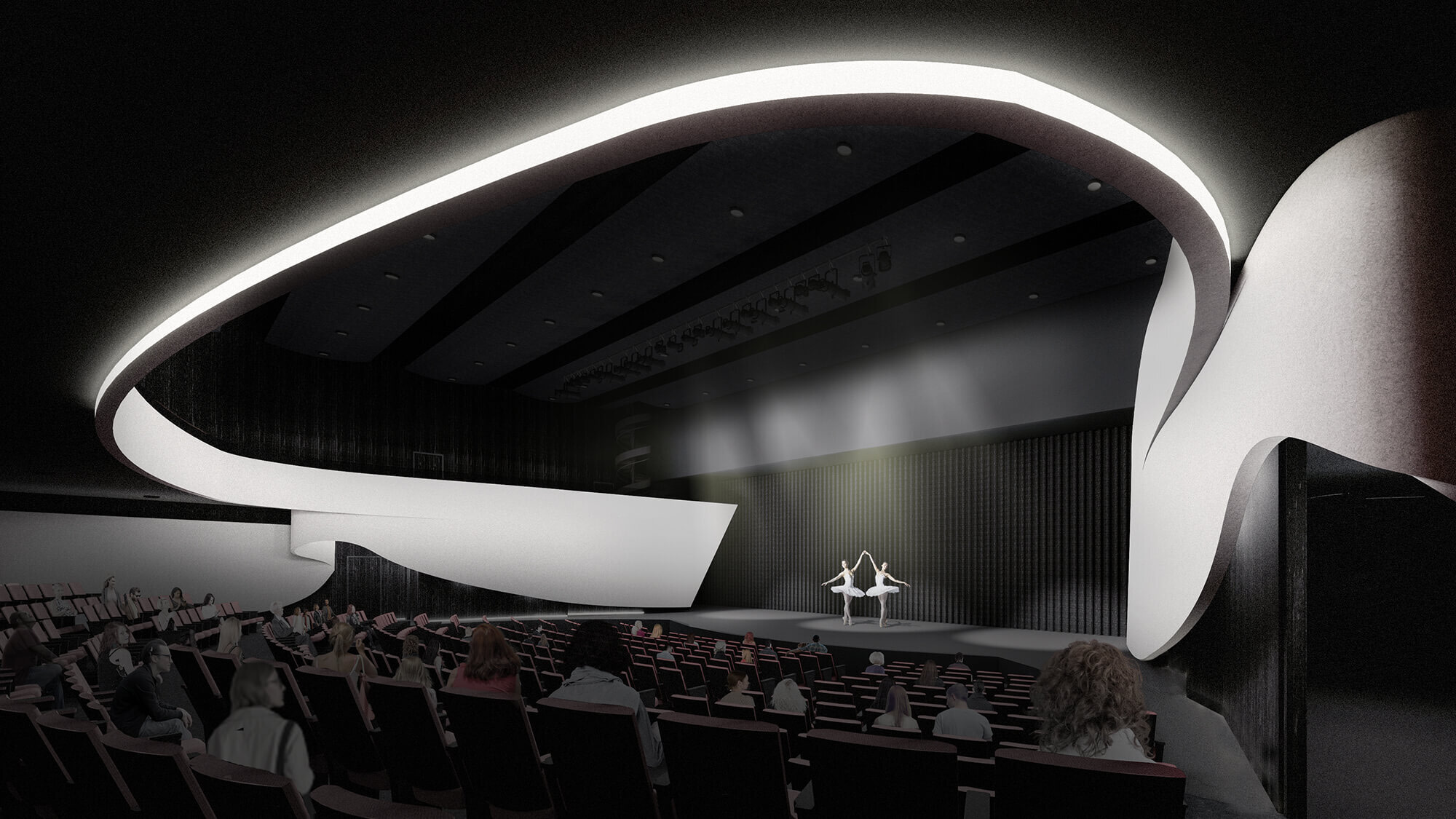 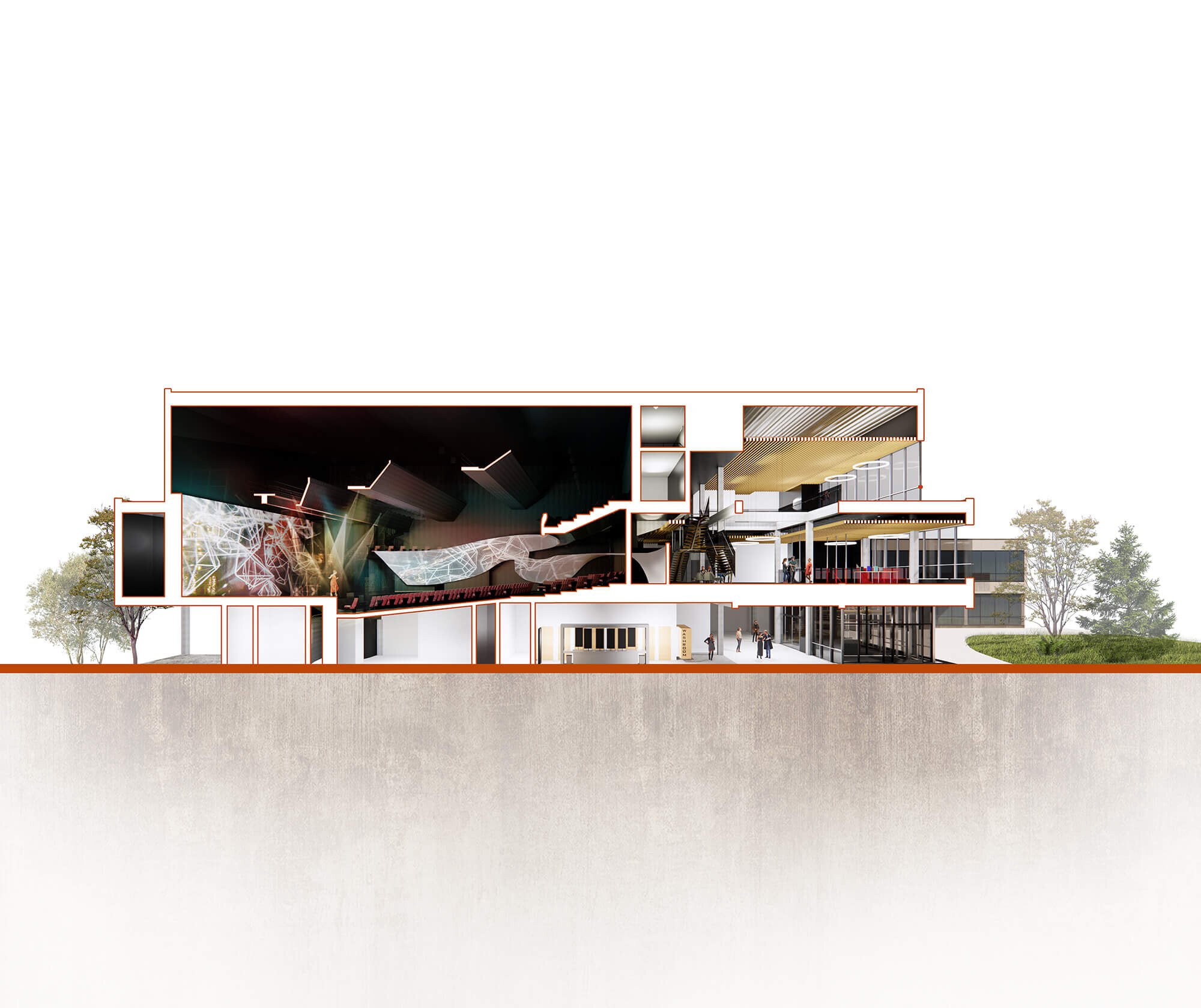 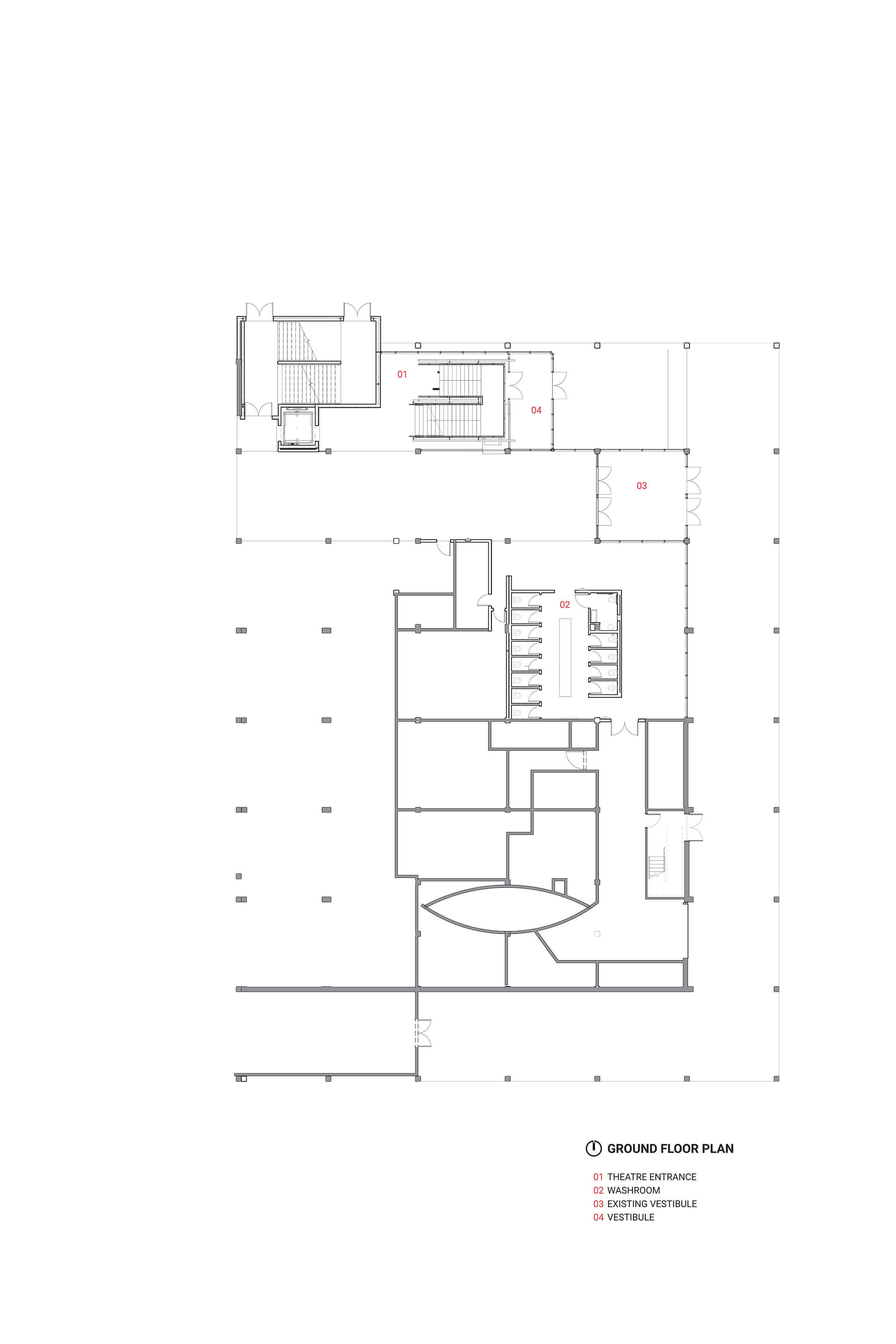 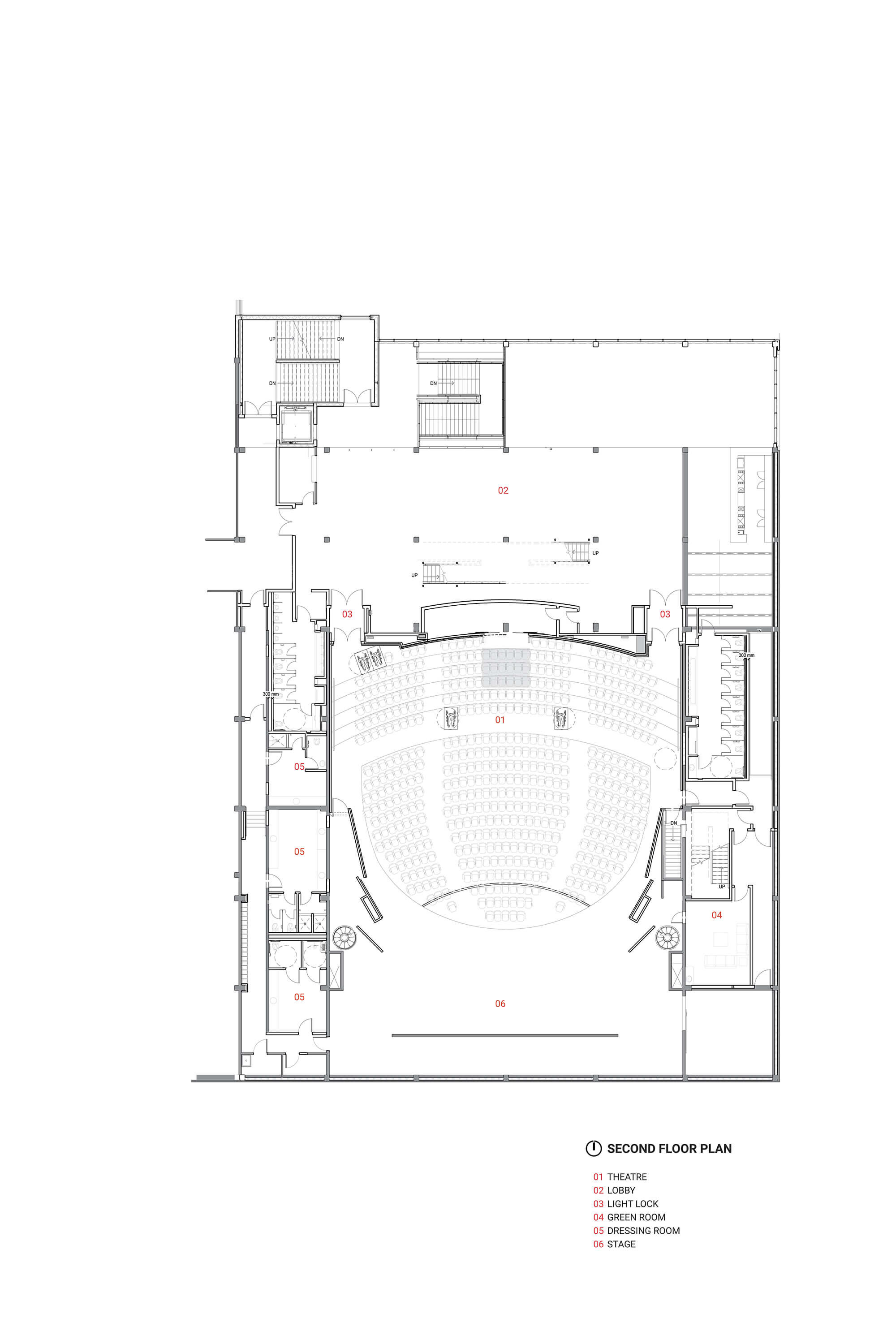 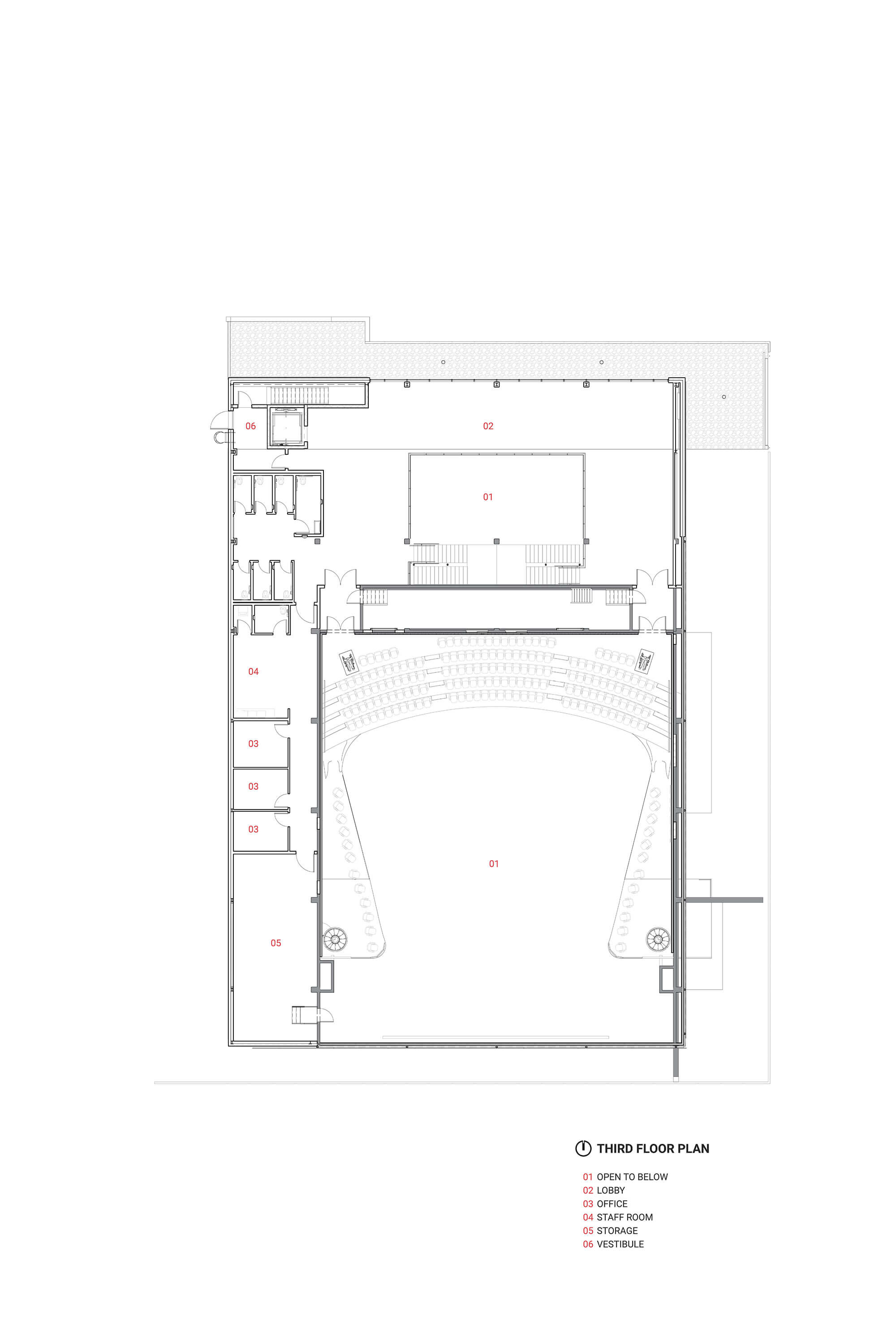 This sustainable redevelopment brought the building up to code with new washrooms and barrier-free access to all areas. The modernization of the chamber included improved sightlines, new sound systems and lighting, and acoustical upgrades.

Expansion to the main and second-floor theatre lobby spaces is now interconnected with a continuation of the original colonnade around the building. New entry doors signalled by an inverted red carpet welcome guests to a functioning pre and post-event area in the lobby.

The architectural approach for the Theatre chamber is to take the existing volume and surfaces and introduce forms and finishes that create a level of excitement that is currently lacking within the space. The existing pre-cast concrete balcony railing will be removed, re-built and expanded with a new steel frame to reduce its load on the structure. It will be finished with a plaster ribbon that envelopes the space and terminates on either end to frame the stage. This is an intervention that is lyrical, dynamic and engaging. The intent is that the form of the ribbon will harmonize with the performance without upstaging it.

The gestural ribbon architectural feature walls stand out from the recessive, dark walls and ceiling of the chamber. A plaster construction allows the complex form of the ribbon walls to be fabricated in an economical manner. The remaining vertical surfaces are intended to recede into the background as acoustically tunable surfaces composed of dark, vertical slats. A similarly pragmatic approach has been taken with the ceiling clouds with the intent being to re-configure them to provide a better approach to stage lighting and improve acoustic efficiency.

The design of the new Theatre lobby reflects an aspiration to create a gathering place that is flexible, welcoming and builds a sense of anticipation. The existing space is characterized by expansive views out to the north, board-formed concrete columns, and a unique feature stair at the center of the space.

A major theme within the design of the space is openness and transparency. The large expanse of south-facing glazing will be reincorporated into the new lobby providing users with an abundance of natural light and views out to campus. Conversely, the transparent facade will serve to increase the visibility of the Theatre lobby from the quad, in essence putting it on display for those on the ground below. The desire for openness and interconnection also informed the large opening in the slab between the main and balcony lobby levels highlighted by the iconic central feature stair (to be refurbished). This interconnection increases the usable area of the lobby space by allowing events to occur across both levels without disconcerting the user experience.

Anchoring the space is the plaster ribbon wall that emerges from the inside of the chamber, again building the sense of anticipation of what is to come. From a functional perspective, the ribbon wall will act as a projectable surface for accent lighting or a display that can be changed to suit the performance or event.

Browse through these related projects 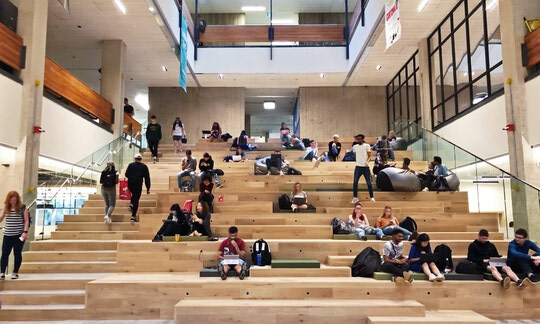 U of A Central Academic Building Renovation Phase 1 + Phase 2

The Central Academic Building (CAB) project at the University of Alberta was an architectural transformation at a major confluence point of a bustling student body on campus. 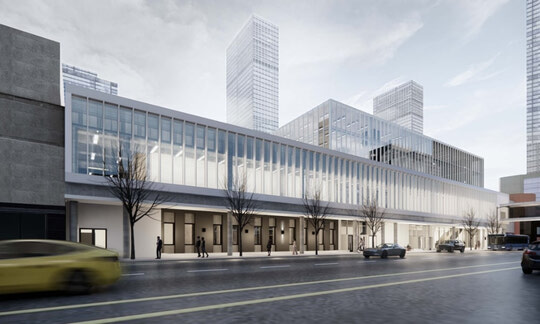 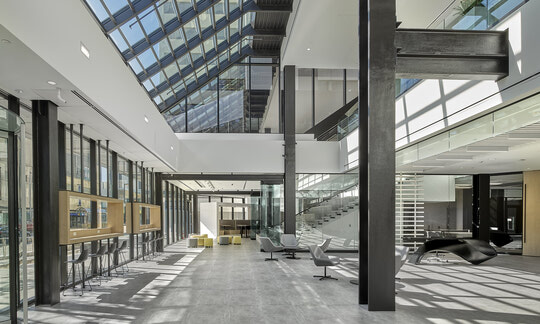 Formerly known as Enbridge Place, this 1970s-era striking all-black modern skyscraper in the style of Mies van der Rohe was given a complimentary interior transformation and enhancement to the podium and plaza.

Discover our team's unique architectural expertise that we apply to each & every project we take on, which provides unrivaled benefits to our clients.

Put a face to the great minds that produce great solutions for our clients, and learn more about our talented team roster.

Our insight into the industry

Learn about & explore interesting topics that our team has written about.

Browse through our collection of featured projects — big and small — that showcase our team's impressive talents & expertise.